The study of the time spent on eating a hay bale measuring 120 cm by 120 cm, which has been wrapped in a 4 cm mesh hay net, by two entirely healthy Fjord horses that are on a daily basis fed with hay only.

The hay bale was placed in the stable around 12:00 hours and subsequently wrapped in a hay net. The stretch wrap and the first layer of hay, which is usually slightly rotten, were removed. The hay bale is mounted on the ceiling and placed on a Euro-pallet.

The hay bale is watched and photographed on a daily basis for the purpose of comparing the pace of eating hay in comparison with the previous study’s results, during which the same two horses were eating the hay bale “in bulk”. 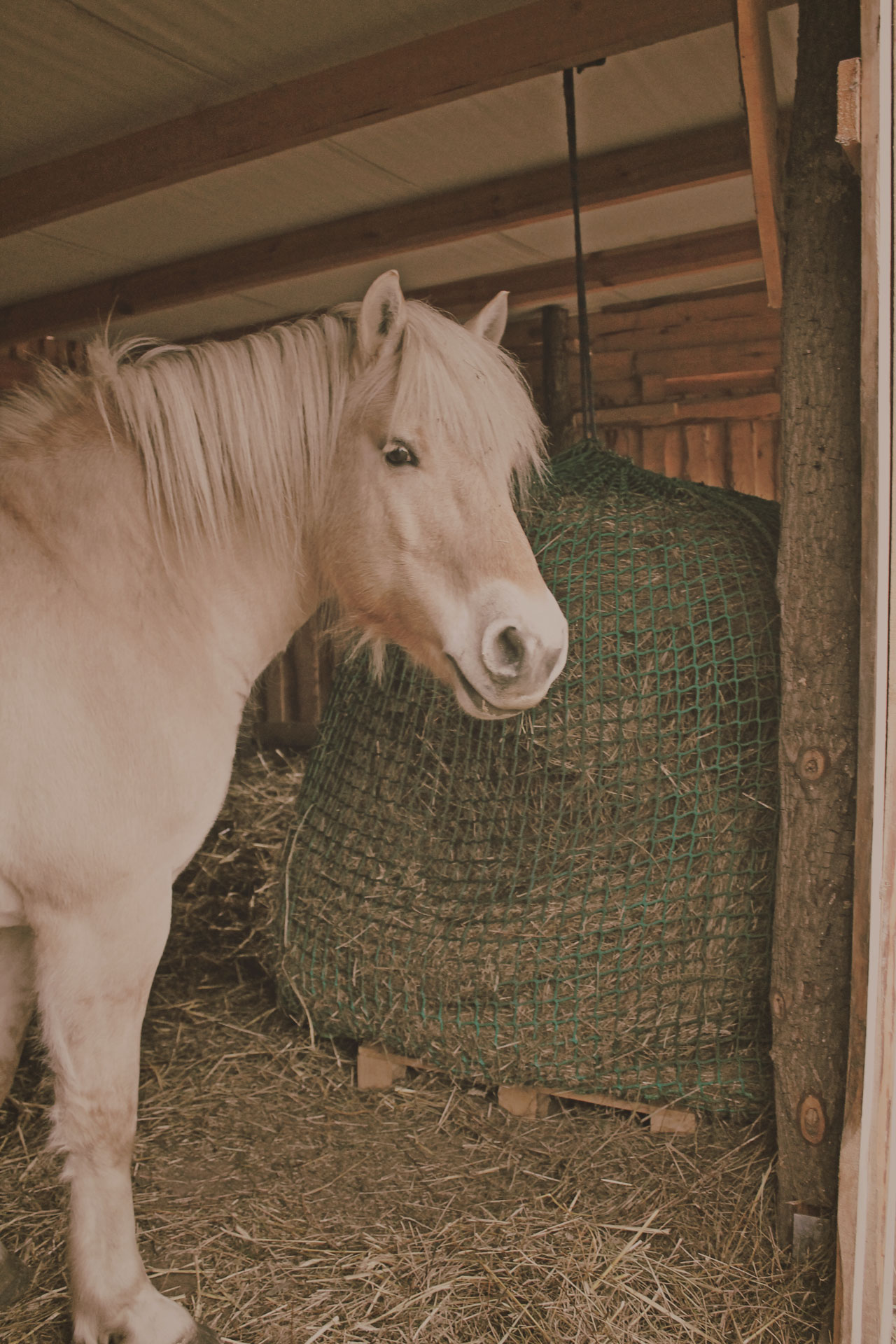 One can clearly see some “holes” eaten up in the hay bale, while the hay net is intact. Hay is firm. It is highly probable that it will be necessary to loosen the rope tomorrow so that it would be less tight. This will result in loosening the tight hay net and, as a consequence, make it easier for the horses to nibble hay. If the hay net is too tight, it can be torn by the horses that will start destroying it, frustrated by being unable to nibble hay. This is the hypothesis that will be confirmed or denied on the next day of the study. 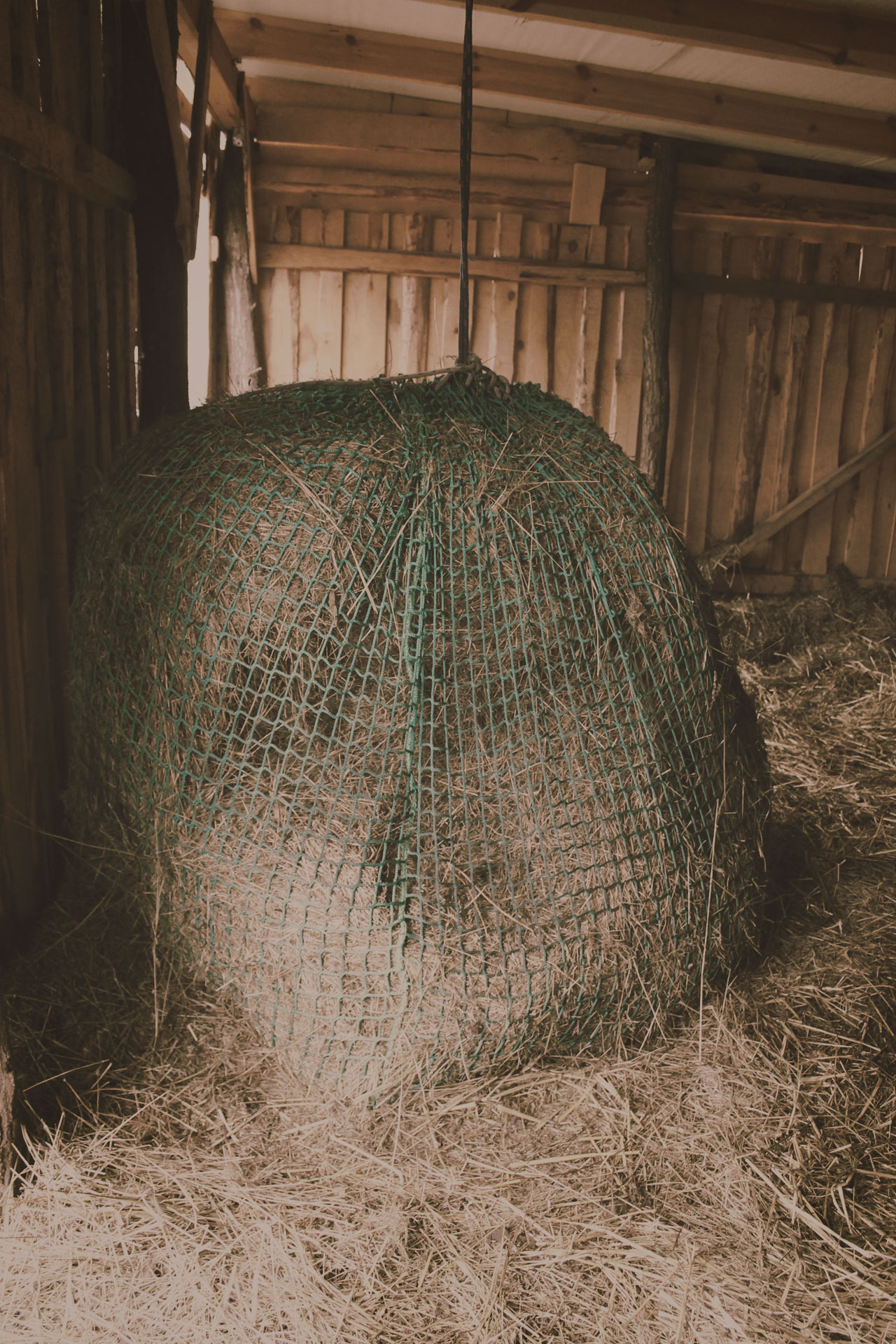 The hay bale has clearly lost its cylindrical shape. It is now hourglass shaped with a “widened” bottom. The first conclusion is that the hay bale should be placed on two Euro-pallets. The aforesaid hypothesis has been confirmed – the rope had to be loosened as the horses had no way of nibbling hay from the hay net, which, in turn, could have been damaged due to too high tension.  Hay falls under gravity.

As soon as the rope was loosened, yet another issue emerged – one of the horses reached hay from the top – it was necessary to tie the hay net tighter. The amount of hay is decreasing very slowly, while the decreases in volume are not significant. From the eating time one must, however, subtract 3 hours when the horses were in the paddock. 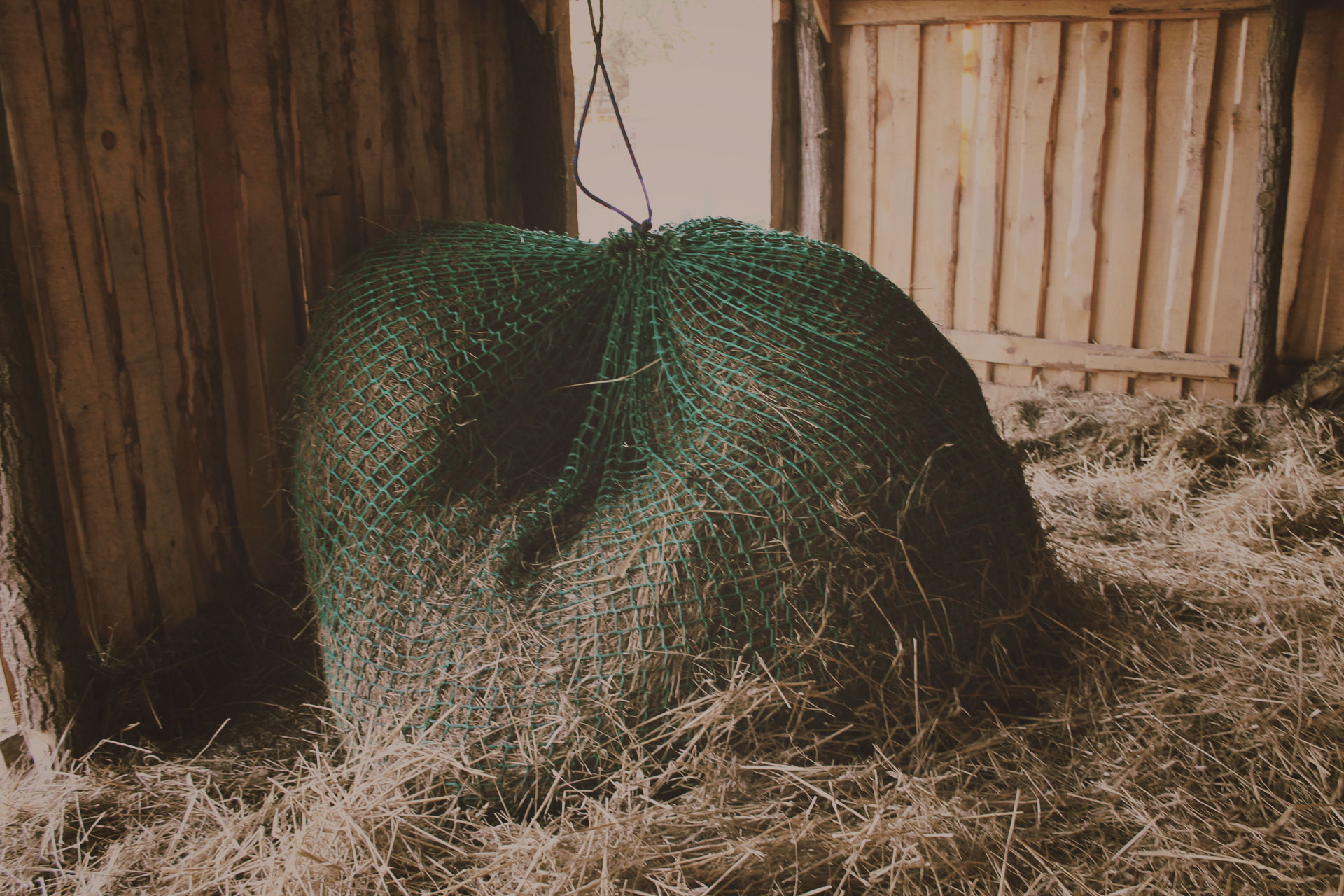 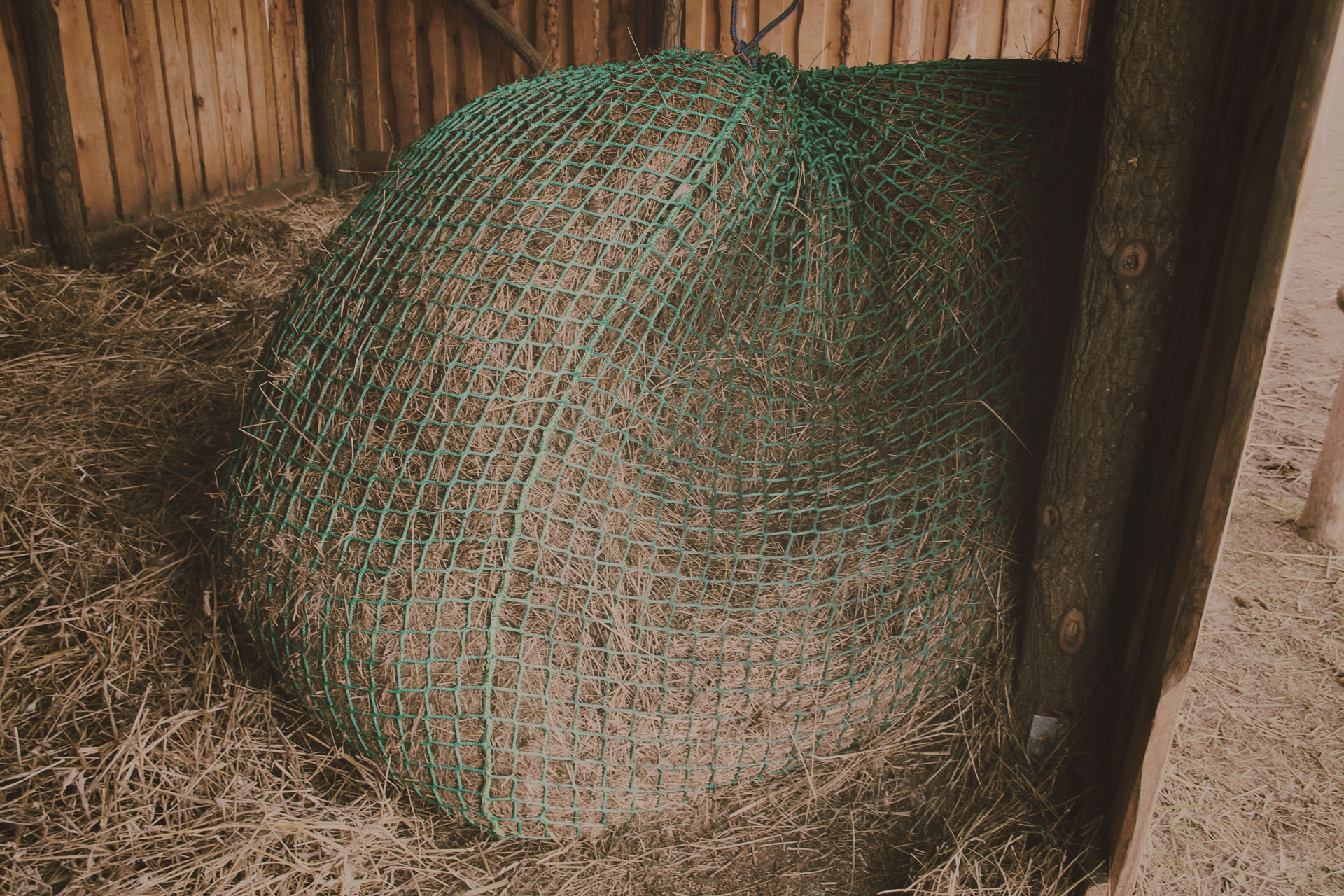 The hay bale is clearly “widened” and there are holes eaten up in it. High spreading force is applied to the connections between the hay net parts. Hay is eaten up in approximately 30% so the eating time is considerably longer in comparison to the hay bale “in bulk”. The horses spent 3 hours on the meadow. 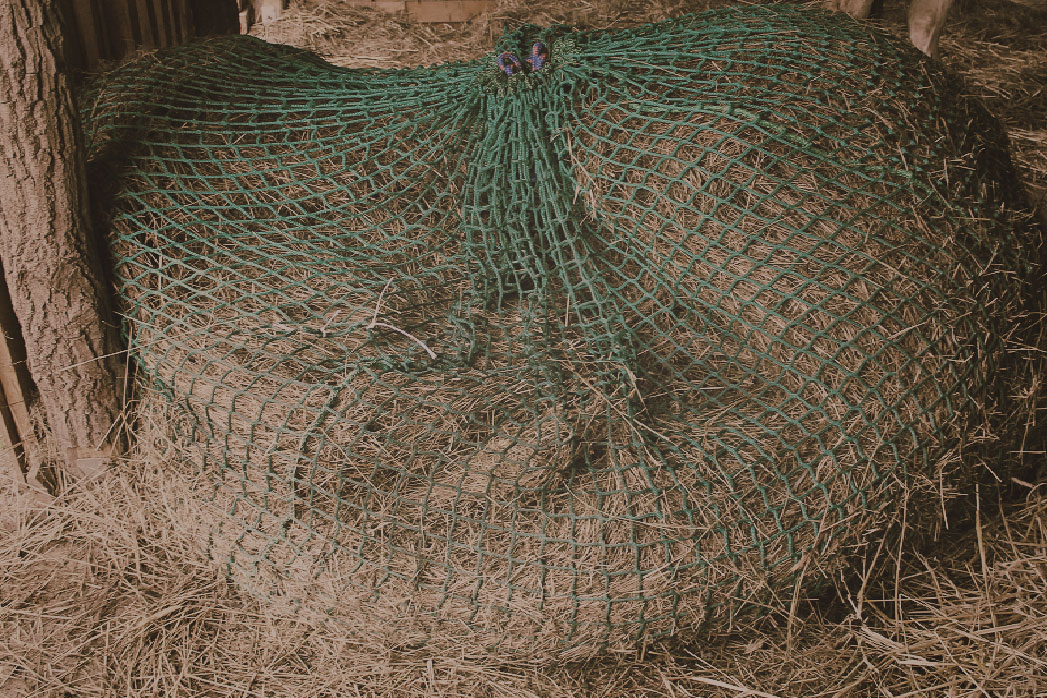 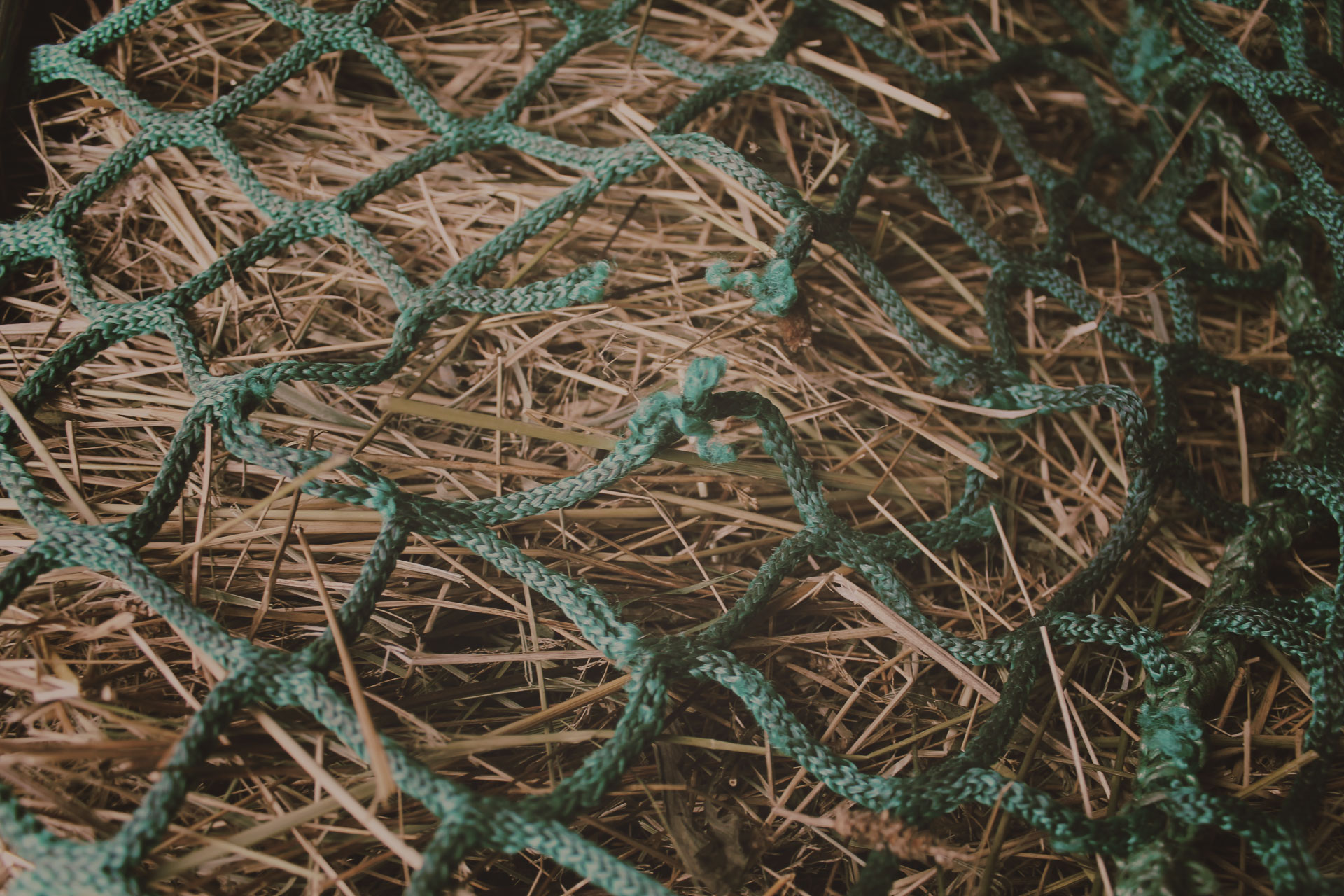 The hay bale is very loose, while the hay net has been torn. One of the horses, while trying to nibble hay, encountered resistance in the form of a tight hay net due to its mounting. The hay net was torn either with teeth or the horse started to paw and tore the hay net, losing its horseshoe, which I found nearby.

The conclusion is that the hay net can be mounted only during the first day when the hay bale is being placed in the stable. If the rope was dismounted yesterday, the hay net would not have been torn by the horse – this hypothesis applies to the situation, in which the horse tore the hay net with its teeth. There is no solution to a lost horseshoe entangled in the hay net. A horse weighing around 500 kg is capable, due to its weight, of tearing the hay net anyway. The mounting rope was hidden inside the hay net. 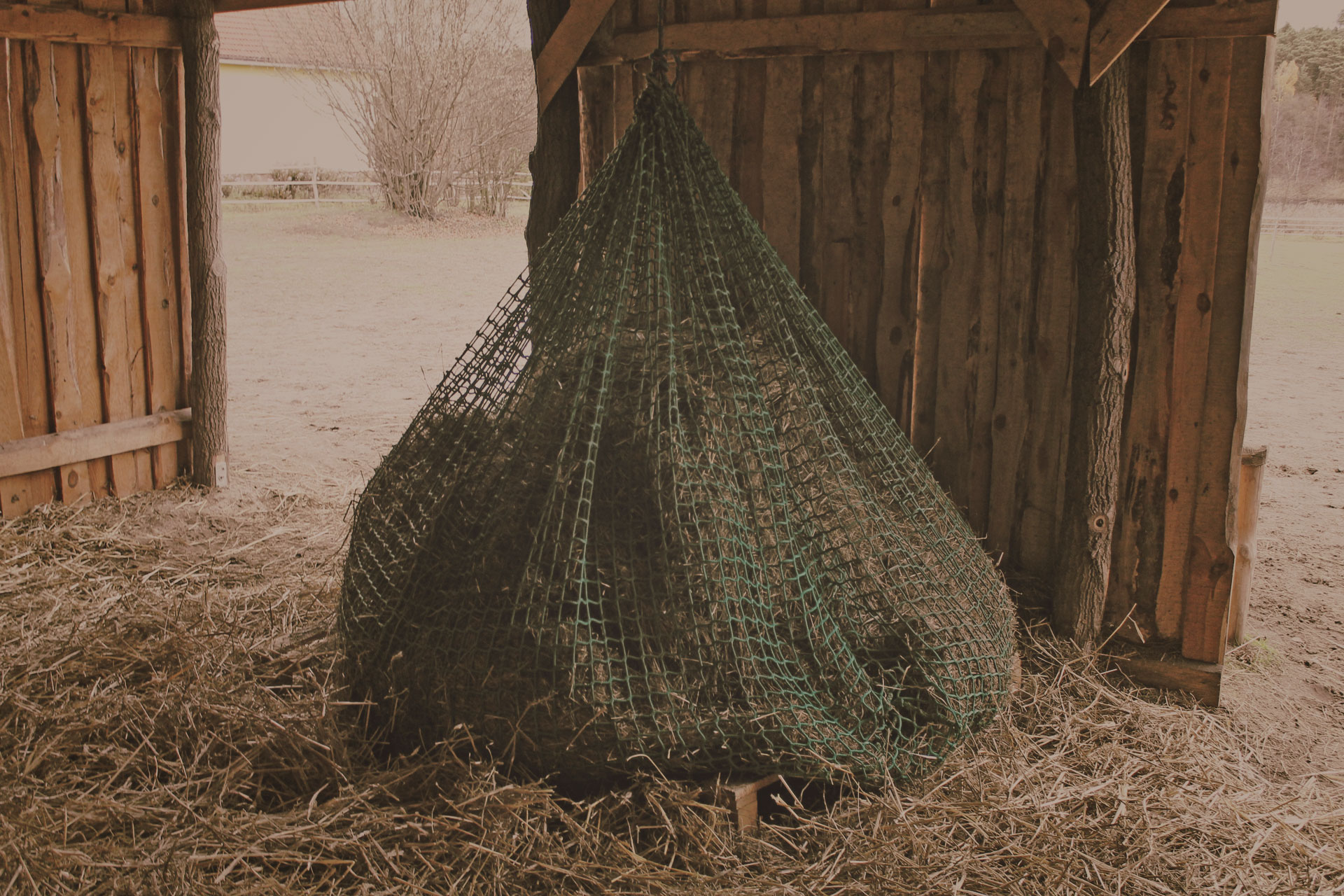 There is still quite a lot of hay but, unfortunately, the horses started to mix the hay net with bedding and the hay net had to be mounted. The tension is not high, the weight lies at the bottom. The horses were on the meadow between 9:00 hours and 16:00 hours. 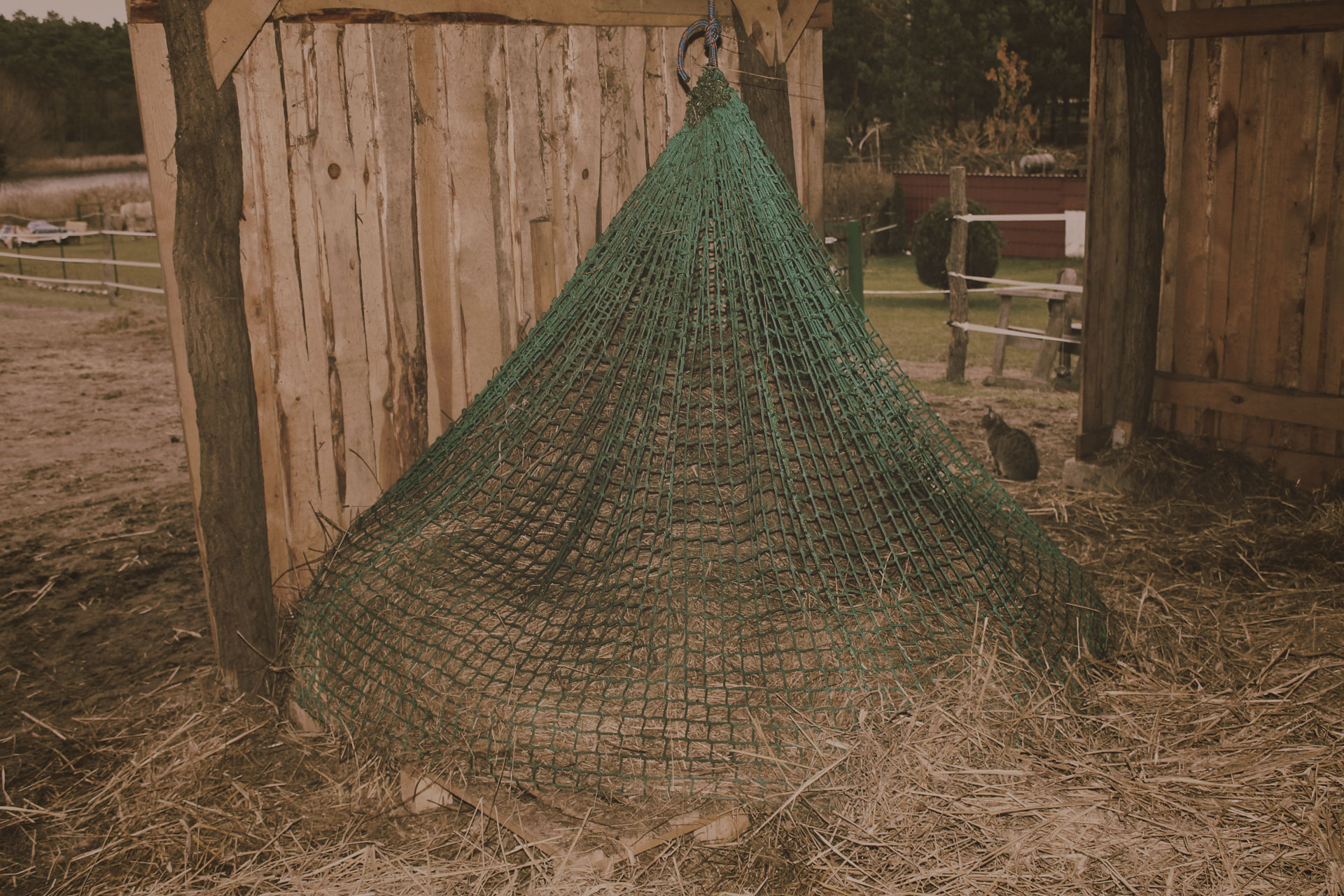 The horses were in the paddock between 10:00 hours and 16:00 hours. There is clearly less and less hay but the process is not as rapid as during the first days. 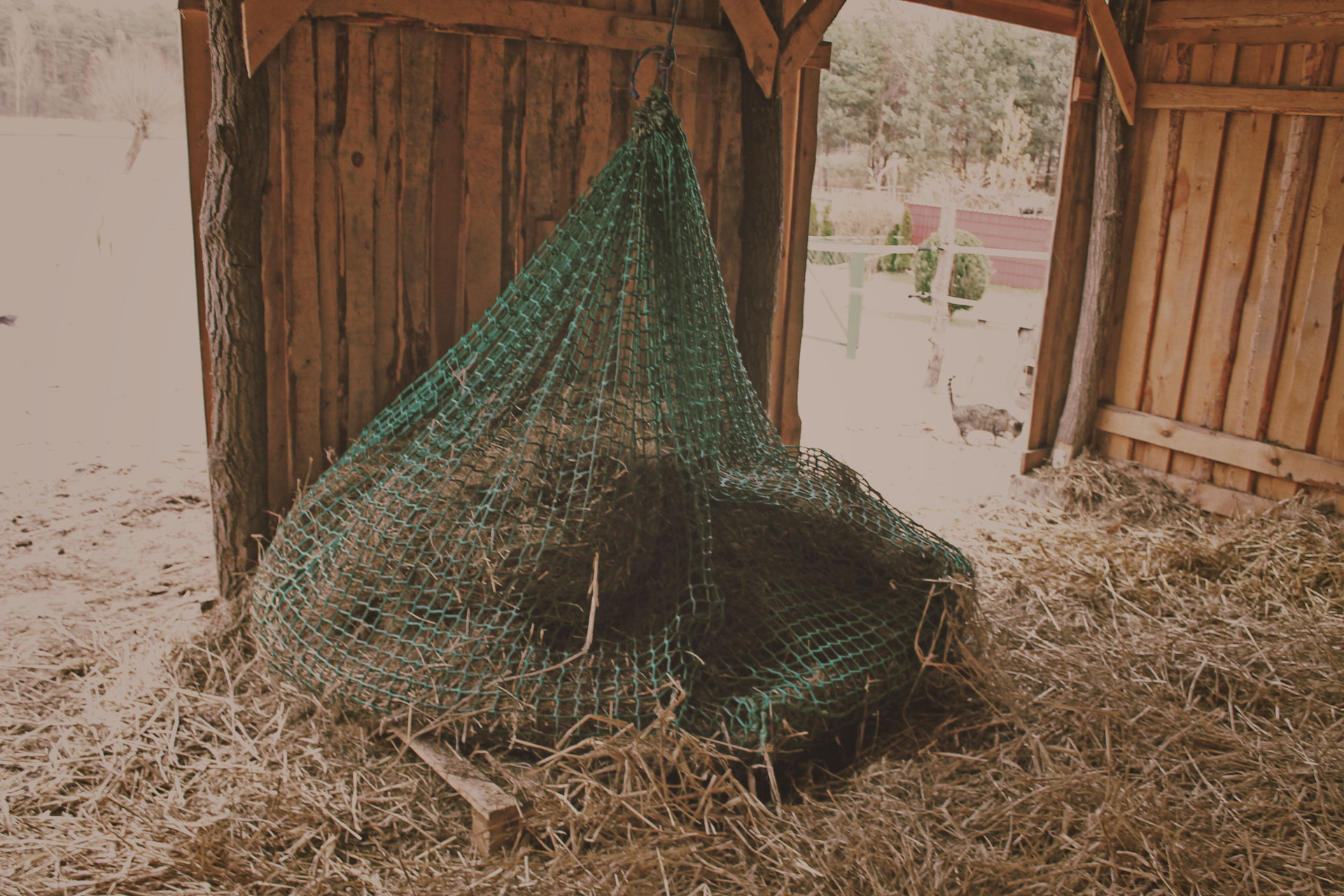 The horses were in the paddock between 10:00 hours and 16:00 hours. There is still a considerable amount of hay left but the horses nibble it quite unwillingly. If it were not for the hay net, hay would have been uneaten and already mixed with bedding for a long time. 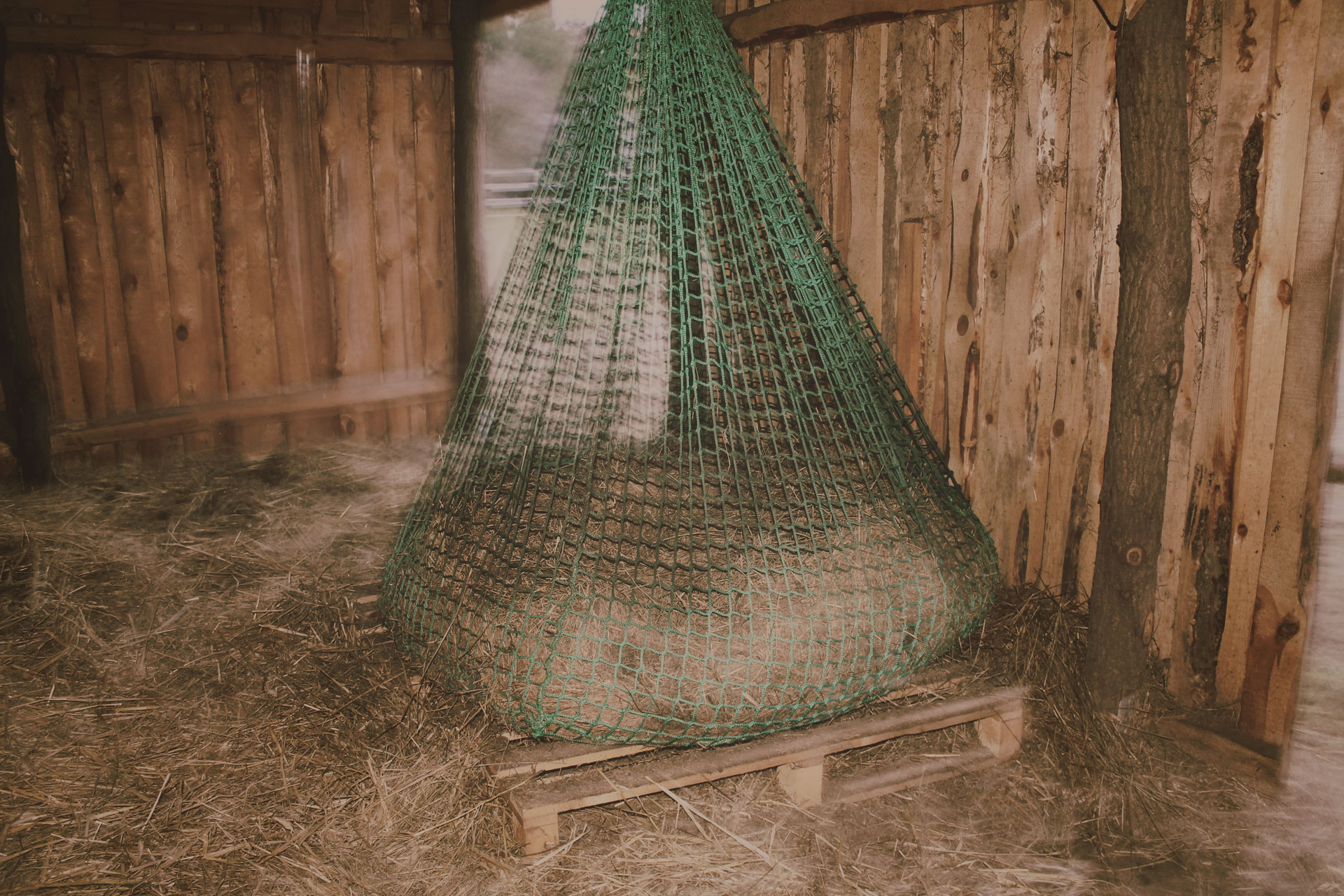 The horses were in the paddock between 15:00 hours and 20:00 hours, they did not eat the hay bale. There is still quite a considerable amount of hay. The rope was pulled up to limit the “widening” of the hay net. 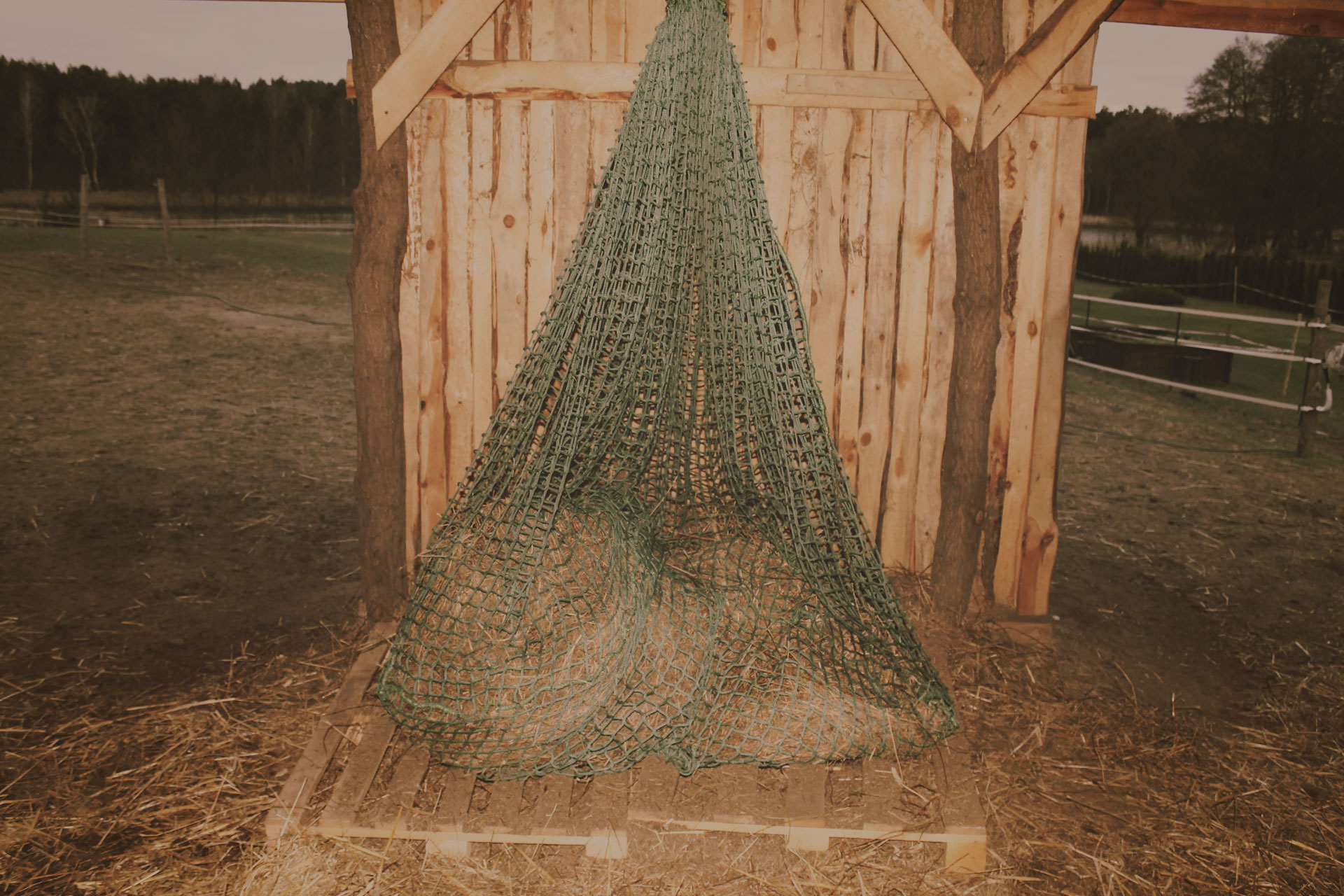 The horses were in the paddock between 15:00 hours and 20:00 hours. The hay is of low quality and pretty dusted. The horses ate up the better blades but it does not mean that there is nothing to eat. The hay net  functions properly, there are no defects.

The horses finished eating the hay bale at 15:00 hours.

Conclusions based on the measurements:

Having summed up all the data, the time spent on eating a net-wrapped hay bale amounts to 8 days, that is two more days than in the case of a hay bale without the hay net. This has a positive impact on the horses – they eat slower and were kept occupied. There are of course some financial benefits too.

A hay bale costs 40,00 PLN and it takes 6 days for the horses to eat it up when it is placed in the stable “in bulk”, which gives us 5 hay bales per month. Taking into account the end of the grazing season, we need 30 hay bales for winter, which gives us the total amount of 1200,00 PLN.

During the entire grazing season we save the amount of 160,00 PLN that equals as many as 4 hay bales.