The study was conducted by Ms Magdalena Koryzma, M.A., starting from 20 October 2015 until the stock was exhausted – the hay bale was eaten up.

The purpose of the study:

To compare and document the time spent by the horses on eating hay. In the first two studies the horses were given a hay bale “in bulk” – without a hay net, while in the third study the horses were given an identical hay bale wrapped in a hay net. The purpose of the studies is to prove the hypothesis that the horses spend more time, nibbling hay from the hay net, and thus do not waste hay. The fact that the feed is wrapped in the net brings more benefits, also in terms of animal health, because horses should eat slowly due to the anatomy of their gastrointestinal tract (a relatively small stomach).

The scope of the studies:

The time scope of the study:

Until the hay stock is exhausted.

Confirming or denying the hypothesis that the decrease in the volume of net-wrapped hay is slower. 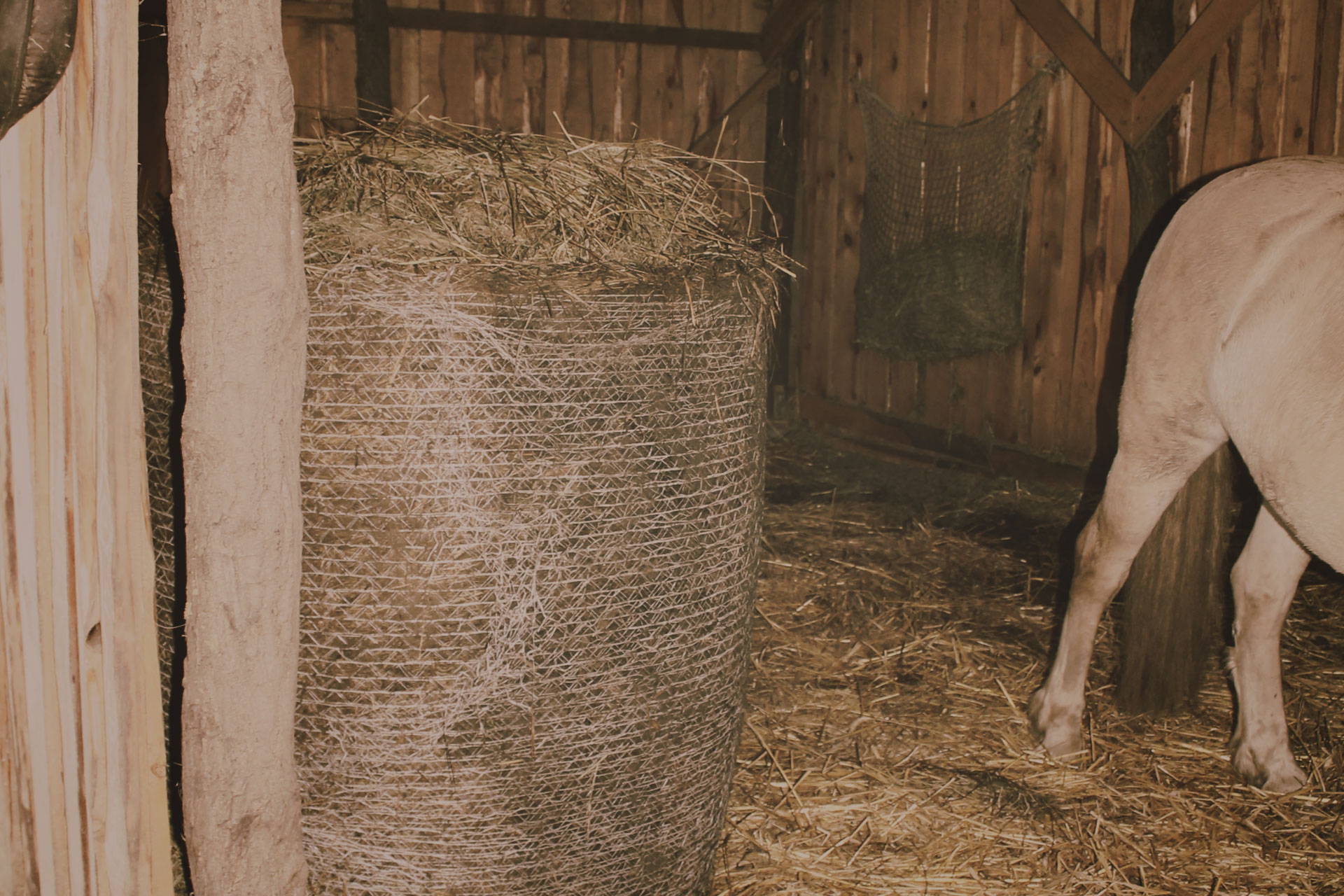 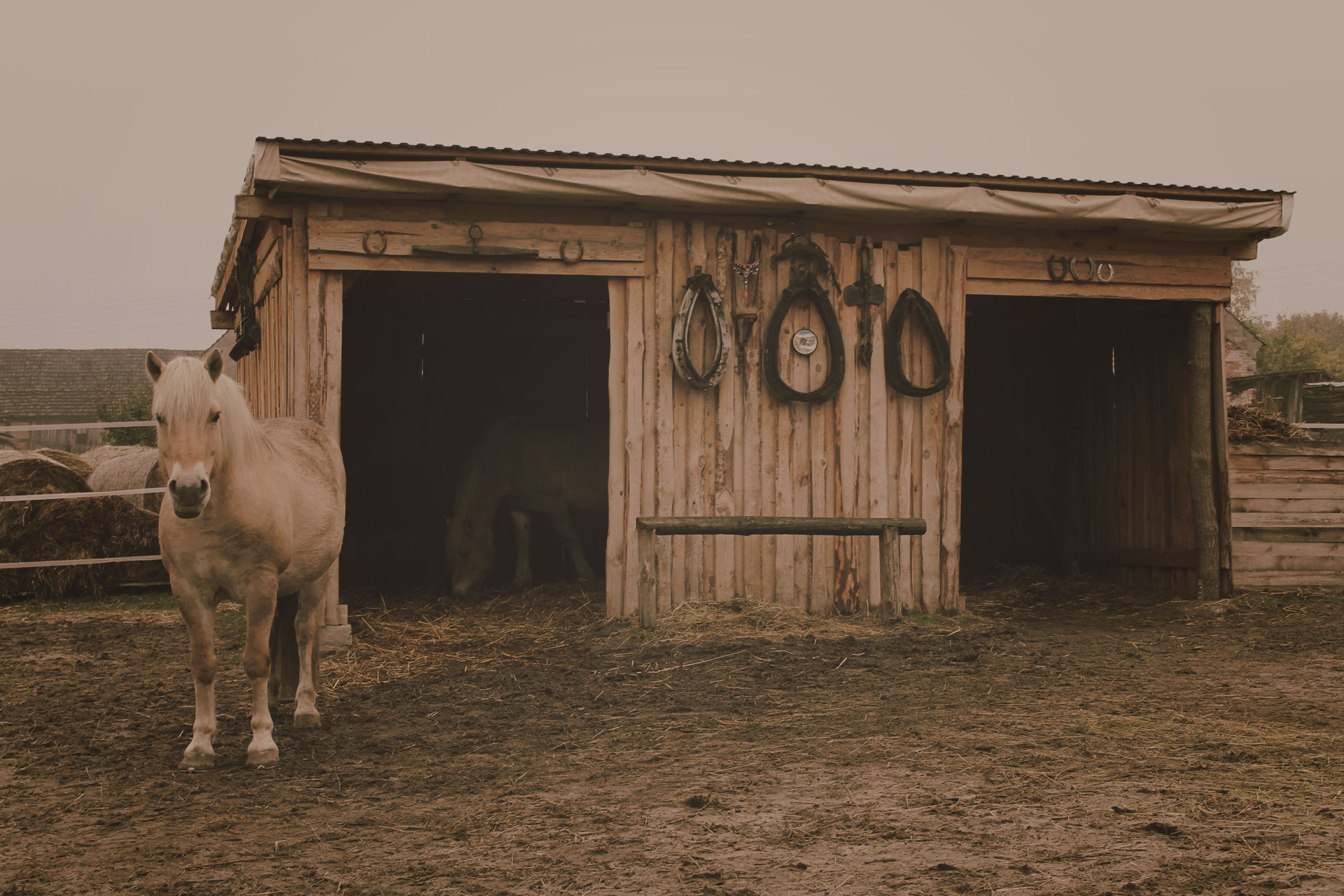 A hay bale is placed in an open plan stable, which resembles natural conditions. The number of horses is 2. The size of the hay bale is 120 cm by 120 cm.

The horses are not particularly interested in hay, presumably because the hay bale is wet. Additionally, for approximately half a year the horses have eaten hay from a 3 cm mesh net, which can be seen in the background in the second photograph. It is apparent from my observations made during that time that the horses choose net-wrapped hay and, less frequently, hay “in bulk”. This is probably due to the fact that they have noticed that slow nibbling takes time – the horses are not getting bored. In their former stables they did not use any nets, even those tiny mesh nets, which makes hay nibbling easier.

The horses being the object of the studies are neither sports horses nor typical recreational horses. They are used occasionally for recreational riding off the track. They are not fed with oats or any other high energy feed due to the lack of activity and biological conditionality of horses of the Fjord breed that excellently digest and absorb given feed. 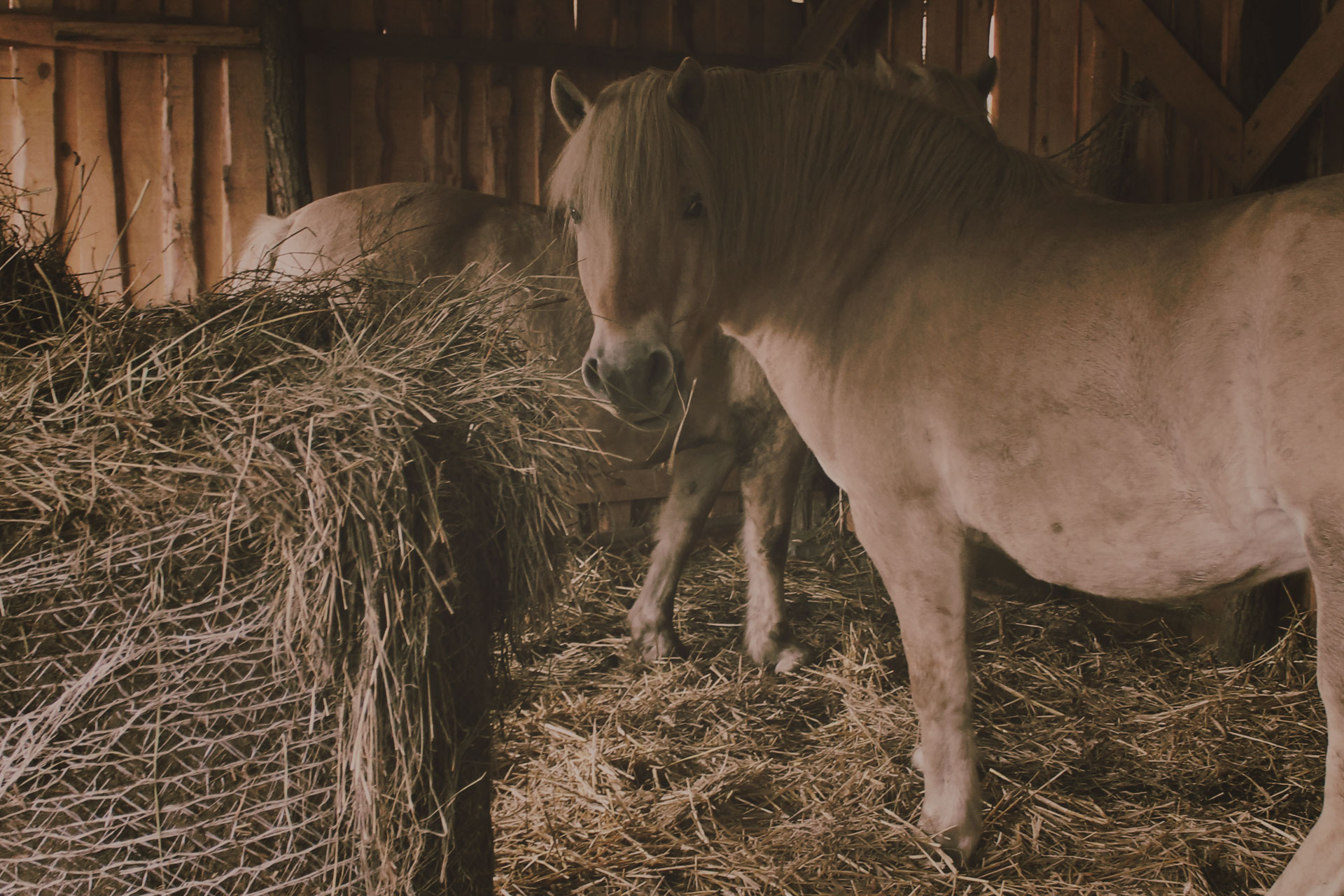 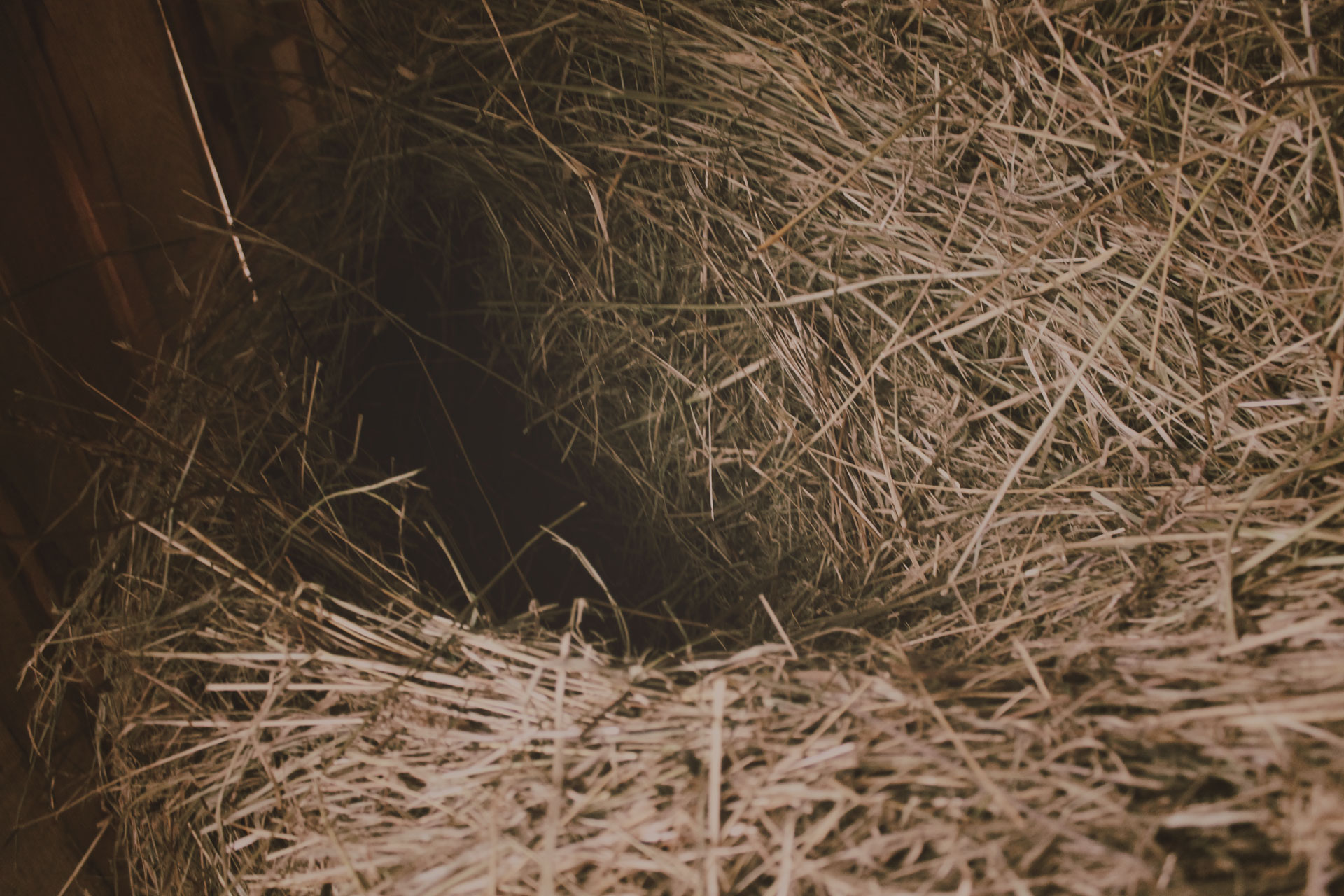 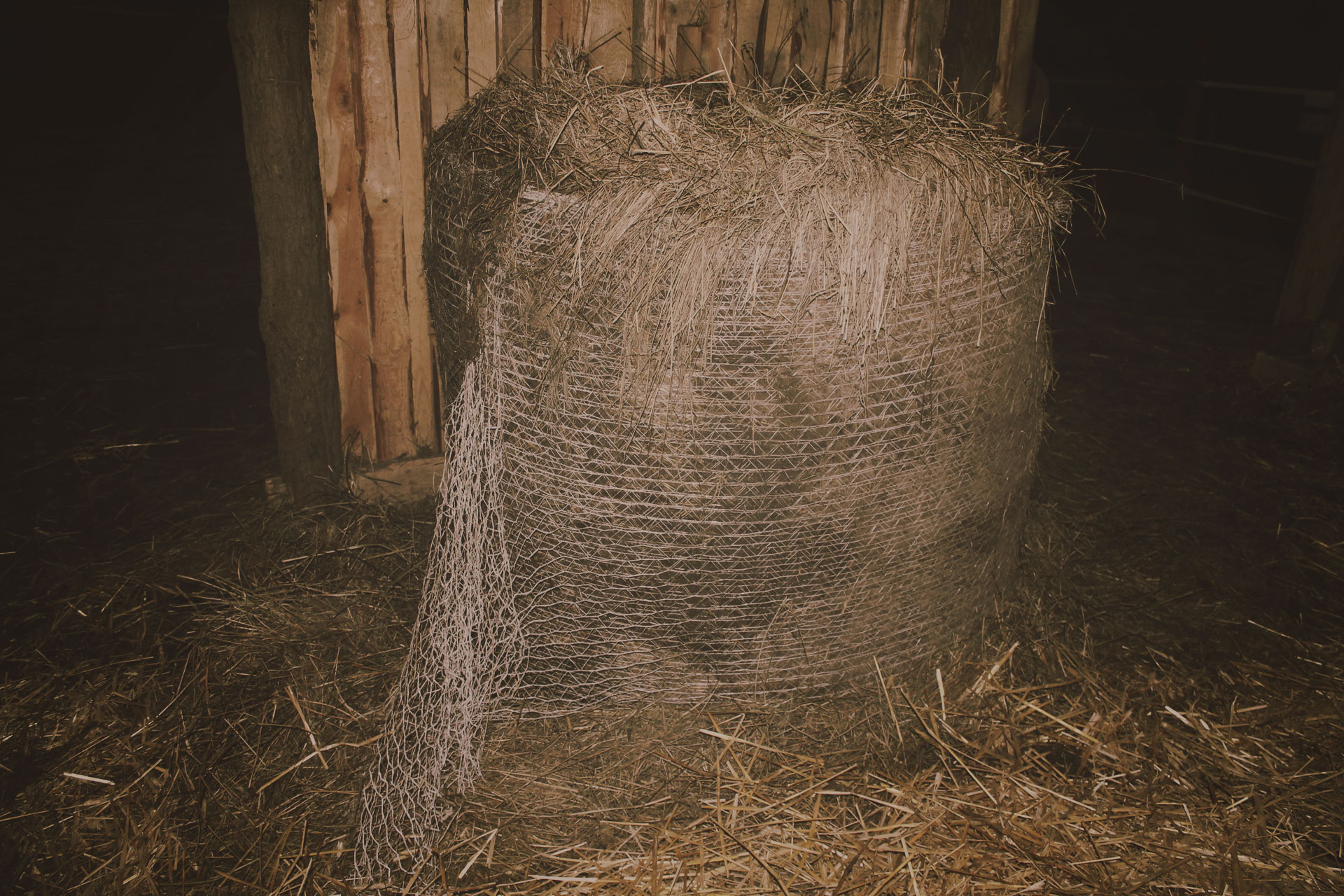 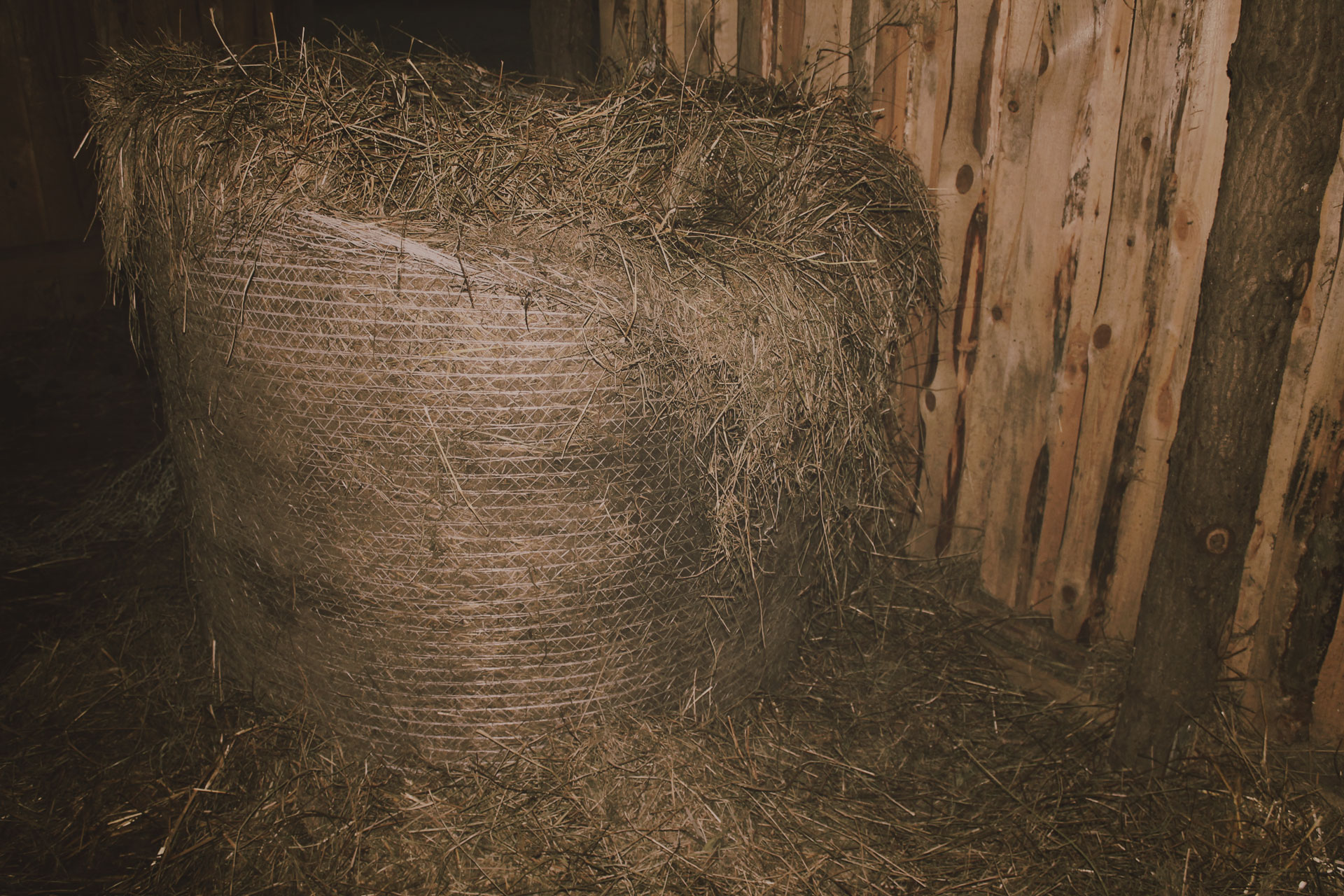 The cover wrapped around the hay bale is slowly being removed. Obviously, the horses know that the cover is not edible. There is a large “hole” in the hay bale on the top. The hay that falls onto the bedding is being clearly trampled. 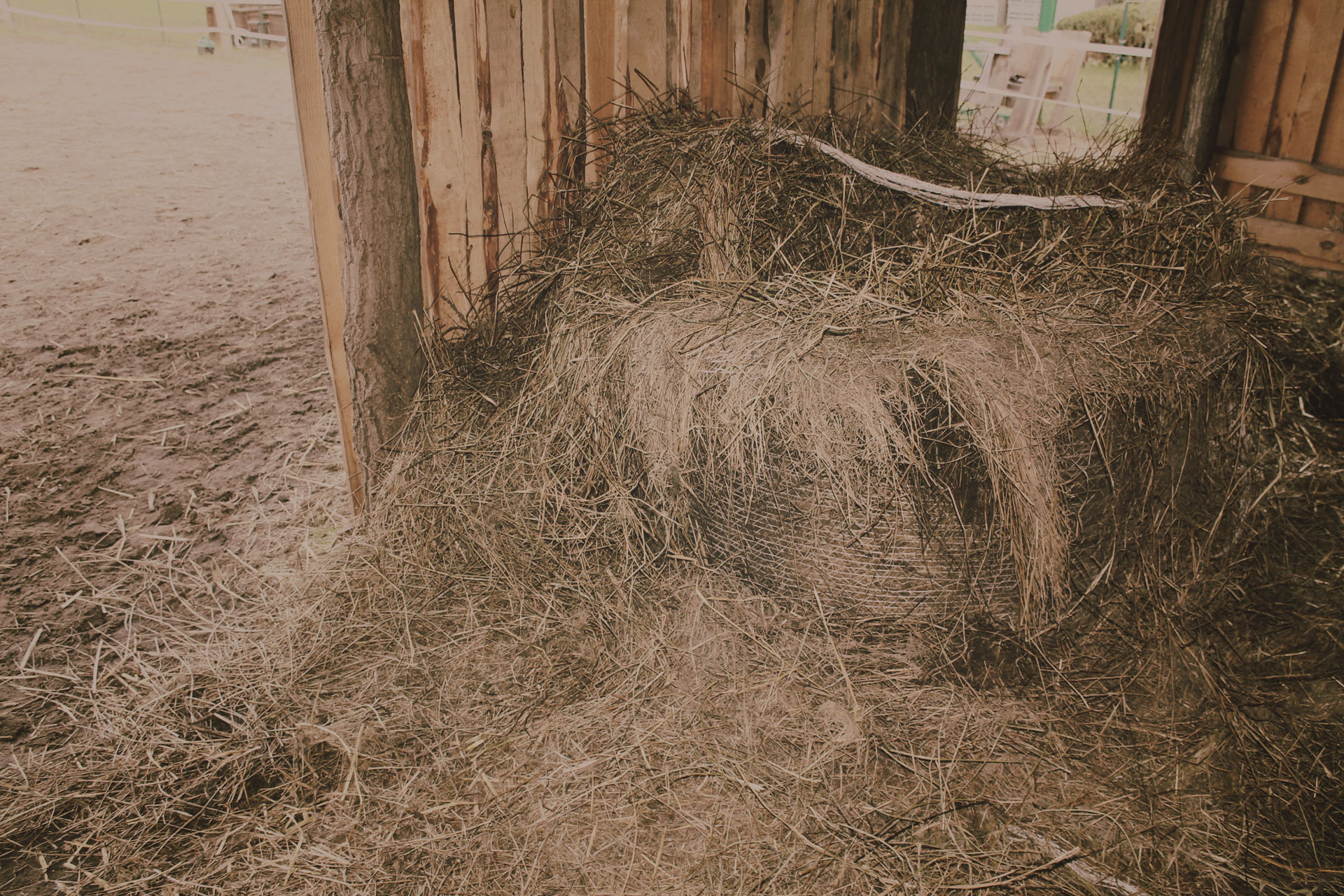 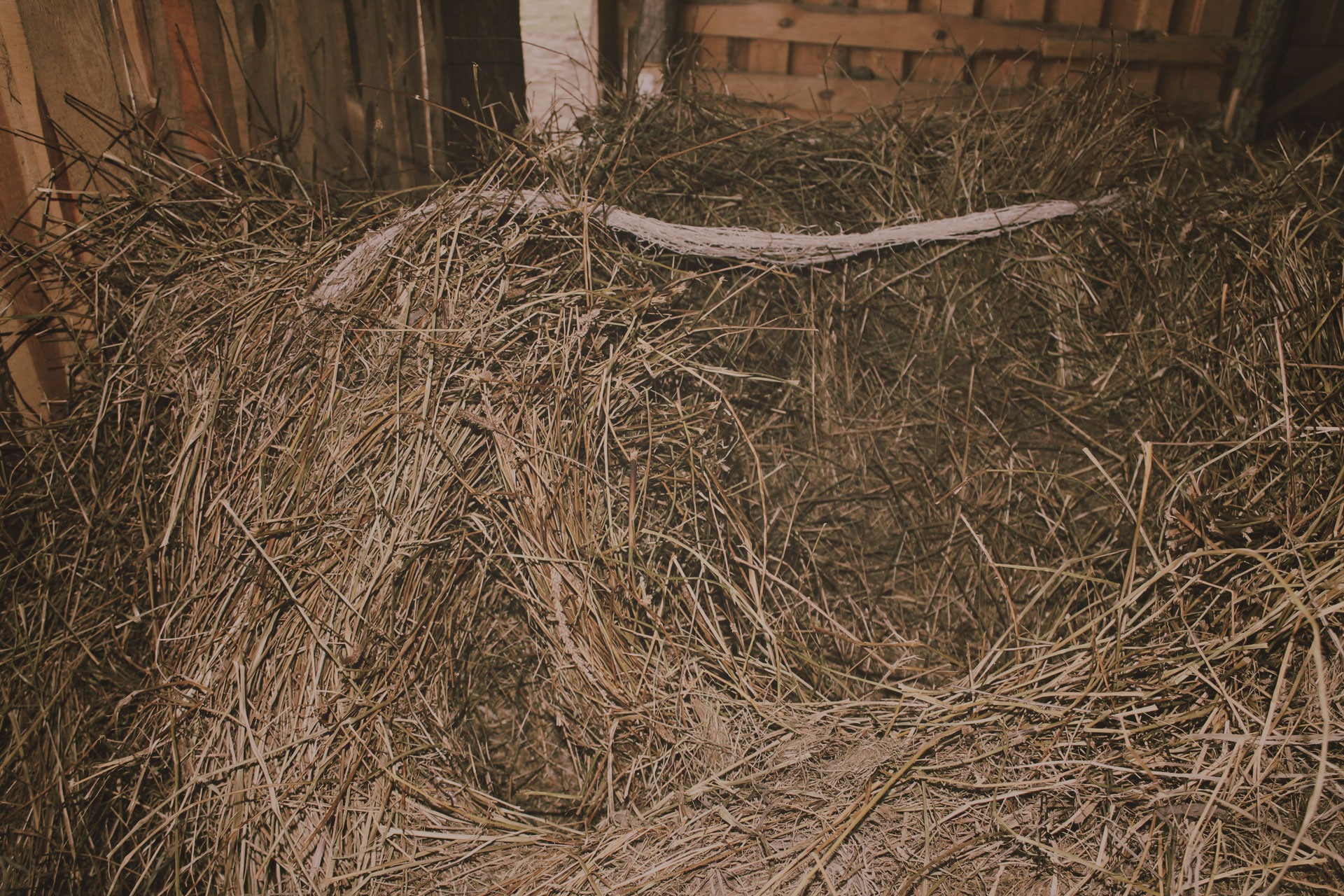 The hay bale is clearly losing its shape. Despite everyday cleaning and bedding there is a lot of hay mixed with dirty bedding. The horses are eating considerable amounts of hay from the top of the hay bale, while the sides of the hay bale has been loosened by pulling out a band that fastens the hay bale. Hay, which falls out under gravity from the sides, seems uneaten, while some of it is trampled and mixed with the ground. 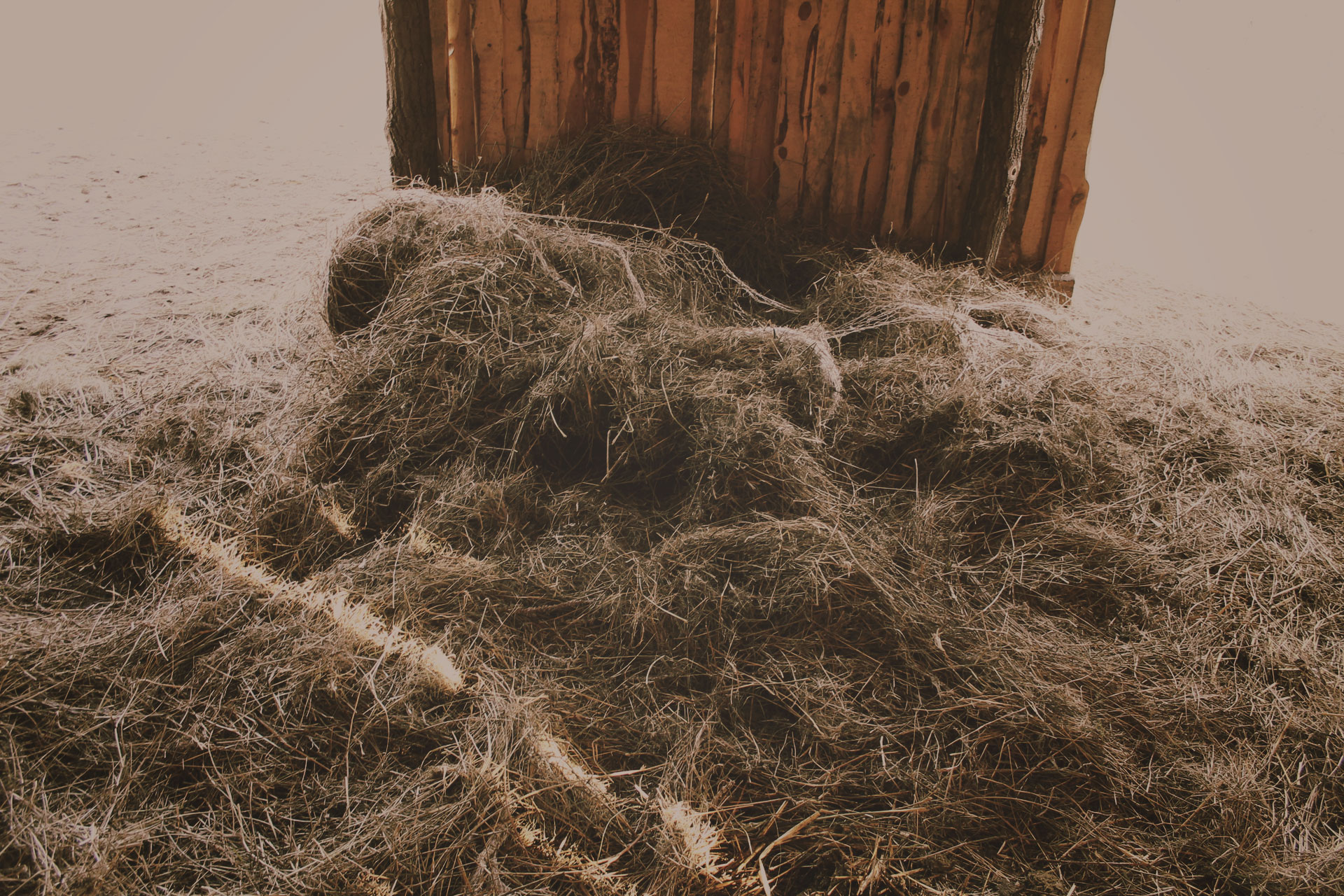 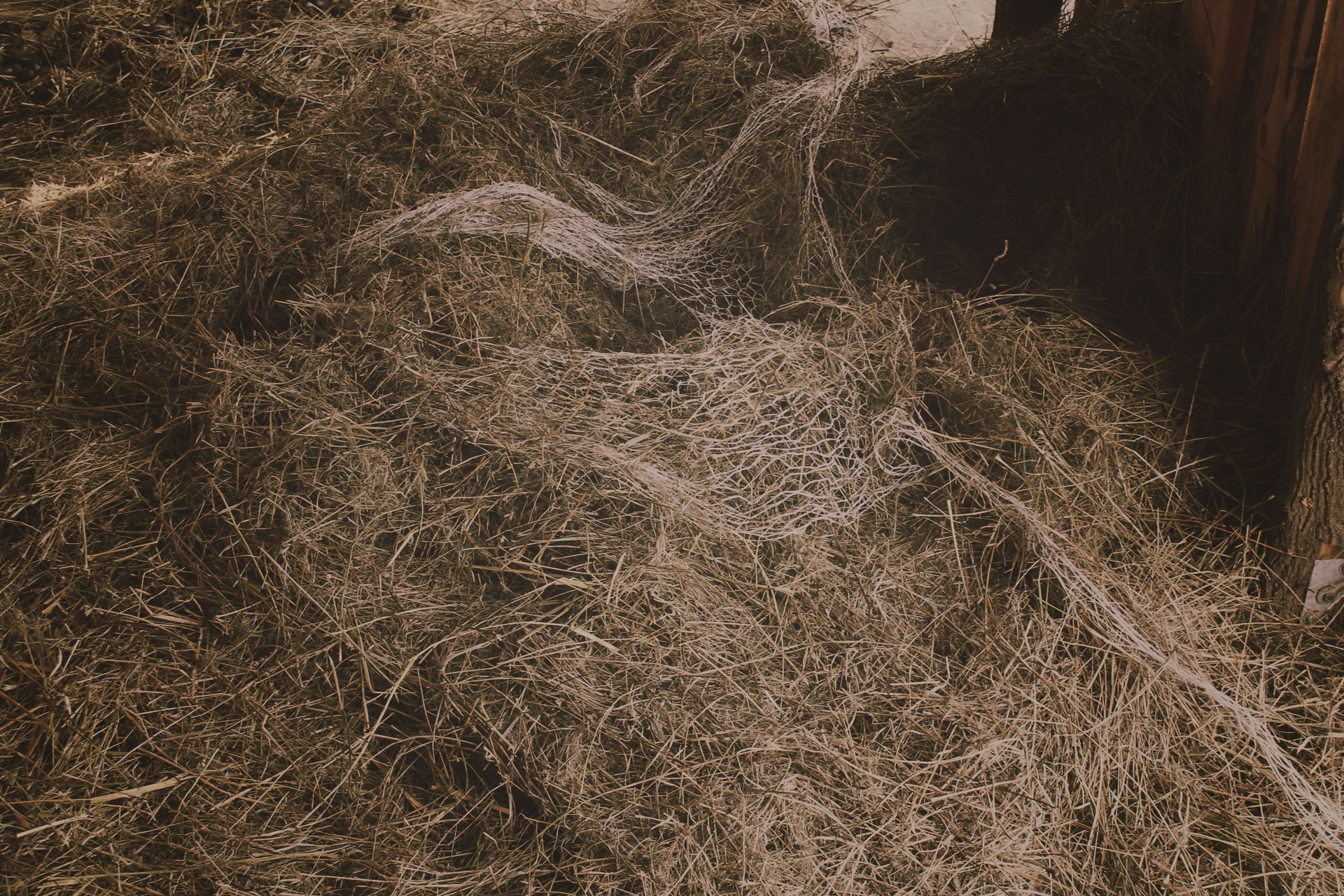 The hay bale is no longer roller shaped. It lies on the bedding in bulk. There is a lot of hay mixed with dirty bedding. 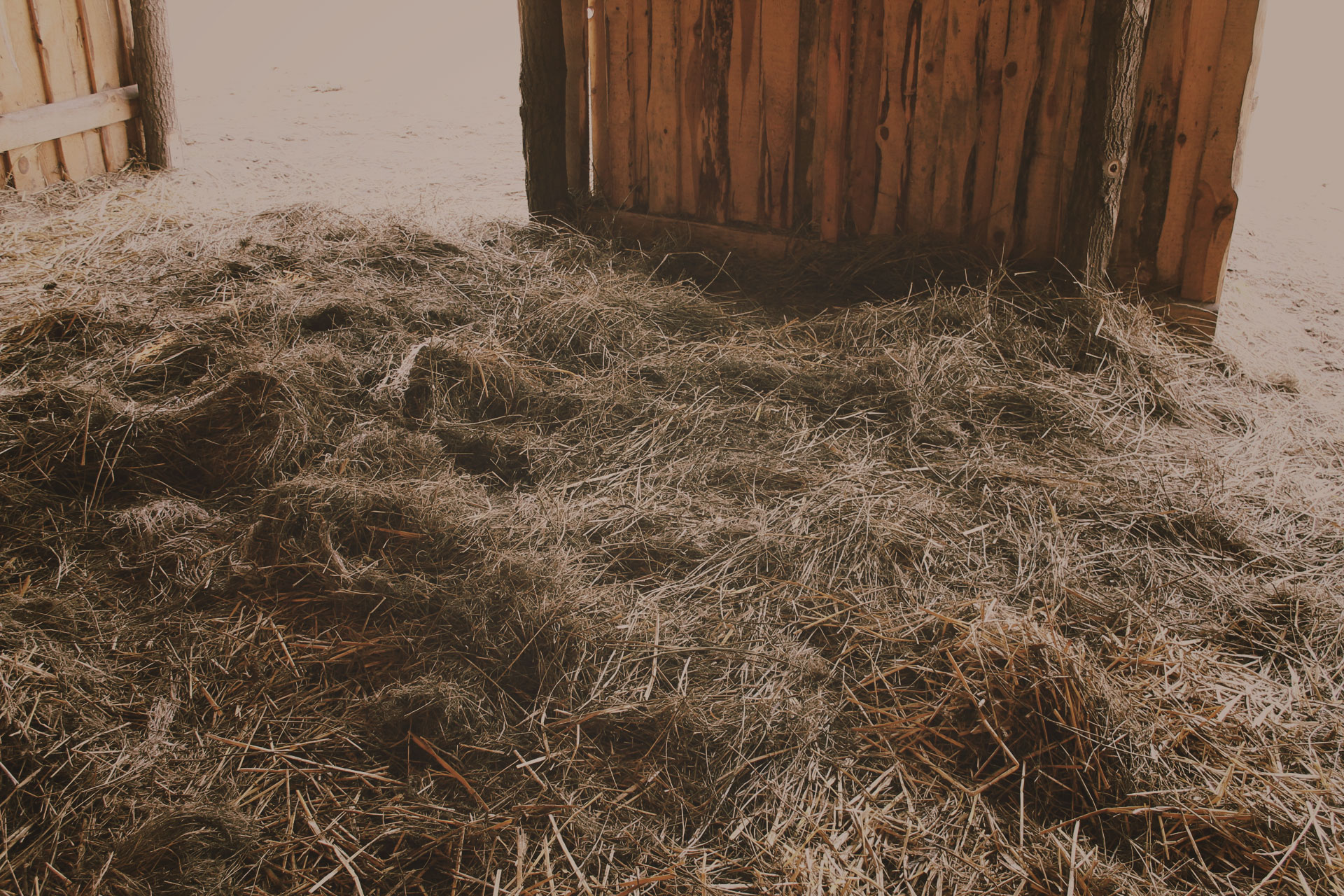 The horses graze on the meadow from dawn till dusk without having access to the hay bale during the day. They eat the hay bale only at nigh time.
After last night the hay bale lies in bulk on the bedding. A very large amount of hay is wasted. Tonight another hay bale has to be given to the horses as whatever lies on the ground will not be eaten anymore because hay is already mixed with dirty bedding.

The hay bale was placed in the stable on 20 October 2015 for the purpose of measuring the pace of eating hay. The horses, which took part in the study, are two Fjord horses fed with hay only. On 27 October 2015 the hay bale was eaten up. Throughout 8 days the hay bale was constantly losing its shape. From the measurement time one must, however, subtract 4 days when the horses were grazing on the meadow without having access to the hay bale. To sum up: the horses were eating one hay bale for 6 full days. That means that for the entire autumn-winter season (from October to March, 180 day/6=30) 30 hay bales need to be purchased. One hay bale measuring 120 cm by 120 cm costs 40,00 PLN, which gives us the total amount 1200,00 PLN. This is the amount that we have to spend on hay only.

The main conclusion is that too much hay is wasted.

Another study will be conducted also with the use of a hay bale “in bulk” in order to eliminate possible errors.